This will be a controversial post. I’m a bit hesitant to publish it, because it will cause a stir, and I’m not looking for trouble. The Fuji X Weekly audience has been extraordinarily civil, which is something I’m extremely grateful for, as the internet can oftentimes be the exact opposite of civil. The internet has a way of bringing out the worst in people, perhaps because they can hide behind anonymity, or maybe there is a disconnect that makes interactions seem a bit less human; whatever the reason, people sometimes are rude or downright mean on the web. I’m asking right up front for civility and human kindness in regards to this article.

The video at the top, entitled My Milestone, was produced by Fujifilm to promote the X100V. It was promptly removed by Fujifilm because of public outcry. The featured photographer, Tatsuo Suzuki, is controversial, not for his images, but for how he captures those images. This video created quite a stir on the internet, and the worst in people showed up strongly in the comments of various articles regarding the video.

Here’s another video that shows Suzuki’s photographs and technique:

It seems as though the majority of people are against Suzuki’s style and agree that the video is controversial, and they believe that Fujifilm should never have associated themselves with him. Fujirumors and PetaPixel even conducted polls that confirm it. Now Suzuki is no longer a Fuji X Ambassador, either because Fujifilm dropped him or he dropped them. I’m going to go against popular opinion and defend Tatsuo Suzuki. The reaction to the Fujifilm video has been a huge overreaction.

As best as I can gather, what Suzuki did in the video that sparked all the outrage is demonstrate his “aggressive” style of shooting. He’s very much “in your face” as he walks the streets of Tokyo with his camera. It comes across as rude, as he invades people’s personal bubbles. My opinion is that he does this because, in Japan, people are extremely guarded, and the photographs that he captures, which are very good, would be impossible with any other technique. It’s the technique that he chooses to use in order to fulfill his photographic vision. It’s abrasive, yes, but also effective.

Suzuki is not the first to use this aggressive technique nor is he the most extreme with it. Bruce Gilden, Garry Winogrand and Eric Kim come to mind, and I’m sure there are many others. These are all successful and celebrated, albeit controversial, photographers, including Suzuki. They are far from the only controversial photographers out there. Even the legendary Steve McCurry has been called controversial at times. My point is this: just because you disagree with something doesn’t make it wrong.

Was Suzuki doing anything illegal? No. In Japan, and many parts of the world, this type of photography is legal. Was he acting different than you or most people might act in public? Yes. Just because you don’t go around taking unsolicited closeup pictures of strangers doesn’t mean that it’s wrong to do so. Is it strange? Yes. Wrong? Not necessarily.

There’s a trend right now to shut down debate when faced with a differing opinion. If there’s something that you disagree with, it’s become common to attack the person whom one disagrees with. It used to be that people could “agree to disagree” and still be kind and caring and remain friends. Nowadays, if someone says or does something that you disagree with, you might attack their character and call them all sorts of names, demanding that they be stripped of their dignity until they change their ways. That’s exactly what I’ve seen in this debate. It’s really nasty and harmful. Those who go to war with their words against someone who did or said something that they disagree with, those people are the ones that stop dialogue, who encourage hate, and stifle civility. It’s good to say, “I don’t appreciate the way he conducts himself.” It’s not alright to call him all sorts of mean names and tear apart his character bit by bit.

I don’t know Tatsuo Suzuki personally. For all I know he’s the nicest guy in the world. Perhaps he helps little old ladies cross the street and rescues cats from trees and does all sorts of good deeds. Maybe he’s the “jerk” that people have been calling him, but maybe that couldn’t be further from the truth. You don’t know. I don’t know. Why assume the worst in him when you don’t know him? We’d all be better off if we assumed the best in others. 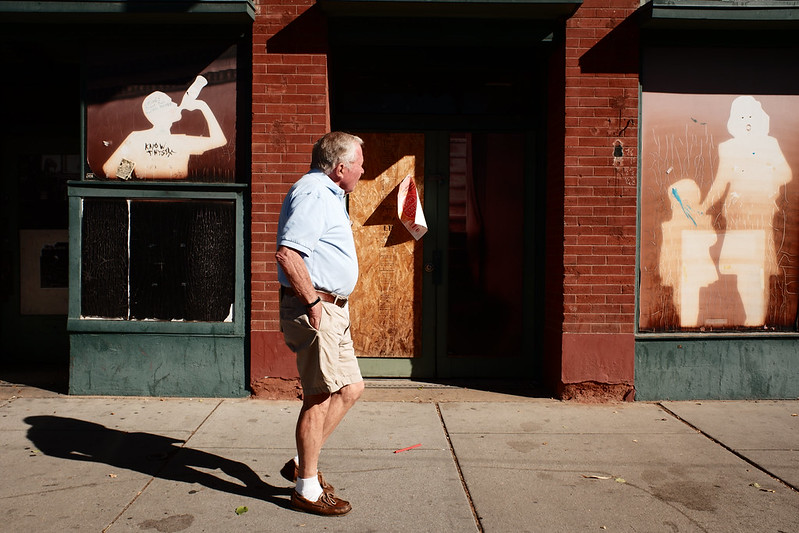 When I do street photography, I like to be the guy that nobody notices who stealthily gets the shot without being seen. One of the big reasons why I do this is fear, but I tell myself that it’s also out of respect for those I might be photographing. Is that really the best approach? I noticed that a lot of people called Suzuki a “creep” because of how he conducts himself when he photographs. But what is creepier: the guy in the shadows hiding and lurking or the guy who makes it completely obvious to everyone around him exactly what he’s doing? While it’s much more shocking to see Suzuki at work, I wonder how shocked people would be to find out someone has been secretly photographing them without them noticing? While ignorance is bliss, I do think being open and honest is better than being secretive and sneaky. Most people don’t have the guts to be open and honest in candid street photography, so they hide.

You might be saying to all of this, “So what?” There’s something that happened to me a number of years ago. Somebody that I don’t know wrote a college paper on the evils of Photoshop. They argued that manipulating photographs of woman was causing a self-esteem crisis among young girls. I had written an article (for a different photography blog) defending Steve McCurry’s use of Photoshop. Remember when that was a big deal? Anyway, whoever this person was that wrote the paper quoted (really, misquoted) me in it, taking my words out of context, and made it seem as though I wanted young girls to have self-esteem problems. It was completely absurd! The university published this paper on their website. Someone that didn’t know me assumed the worst in me based on a quote that they didn’t understand, and unfairly attacked my character. That was completely wrong of them to do it! The lesson here is that we have to be very cautious not to do the same to others that this person did to me. Thankfully, I don’t think anybody cared what the paper said and nothing negative came out of it. In the case of Suzuki, someone did care what was said and something negative did come out of it.

Fujifilm knew who Tatsuo Suzuki was when they invited him to be an ambassador. They knew who he was when they made the promotional video for their product. They should have stood by him and defended him. If they lost a few customers over it, that’s alright because they knew who he was and despite that (because of that?) decided to partner with him. It seems pretty crummy to toss him aside just because some people complained. It also seems crummy that people don’t care to understand Suzuki’s point of view, and prefer the easy route of character assassination instead. I think that the best advice moving forward is to take a deep breath and examine ourselves first before biting someone’s head off. We have two ears and one mouth, so we should be quick to listen and slow to speak. Or, in this case, slow to type.