Two days ago when The Great American Solar Eclipse of 2017 made its way from coast to coast, a whole lot of pictures were taken. In all likelihood, more pictures of the sun and moon were captured that day than any single day before. It was a big event!

I live in the Salt Lake City, Utah, metro area, which is not far from where the full eclipse could be seen. Unfortunately I had obligations (you know, a job) and couldn’t journey a few hours up the road to see that. From my home, however, I could view a 93% eclipsed sun.

We set up some chairs in the front yard and the kids rode their bikes. We had secured some solar glasses that allowed one to look directly at the sun without harming the eyes. We were amazed as the light around us changed. We saw the sun slowly disappear behind the moon. I used my Fujifilm X100F to capture it all.

You might think that the X100F, with it’s fixed 35mm (equivalent) focal length lens, would be the wrong gear for capturing the eclipse. And you’d be both right and wrong. The best photographs that I’ve seen of the eclipse were captured with long telephoto lenses. A wide angle lens isn’t ideal for photographing something that’s about 240,000 miles away crossing in front of something that’s about 93,000,000 miles away.

But the X100F did better than I expected. Plus, a long telephoto lens isn’t the best choice for capturing the rest of the action: the people. Those watching the event were just as interesting as the event itself. The X100F, with its leaf shutter and excellent built-in fill-flash, was the perfect choice for people pictures.

While I could have grabbed a bigger camera and attached a longer lens, I’m glad that I didn’t. I was able to get some good shots that will become cherished memories. And I didn’t have anything big to lug around or get in the way. I was able to enjoy myself and the company that I was with.

I captured the solar eclipse using the camera’s built-in neutral-density filter (you can see the eclipse in the lens flare): 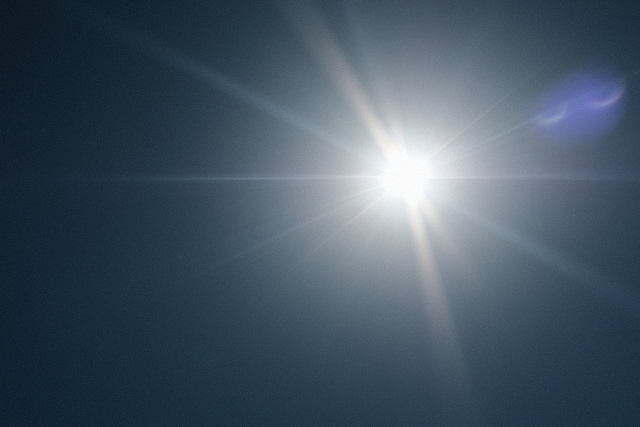 I also captured the eclipse shooting through the solar glasses: