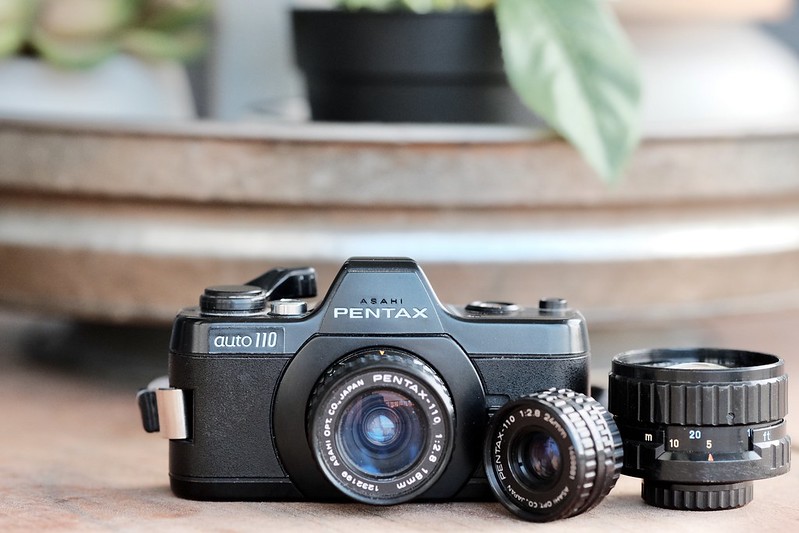 The Pentax Auto 110 is the smallest interchangeable-lens single-lens-reflex camera ever produced. Never heard of it? That’s OK, I hadn’t either until a few weeks ago. This little camera was introduced in 1978, and the Pentax Auto 110 system was manufactured until the mid-1980’s. In all, there were two SLRs and six lenses made by Pentax, plus several accessories, so this was indeed a complete camera system.

The Pentax Auto 110 camera is extraordinarily tiny! It fits into the palm of my hand, and looks more like a toy than a real camera. You might think that it was intended for kids, but it wasn’t. What allows this camera to be so small is that it uses 110 film, which is quite a bit smaller than 35mm film. In fact, the frame is similar in size to a Micro 4/3 sensor. If you aren’t familiar, 110 film comes in a cartridge that’s easy to load and unload, designed for the novice. The tiny film allowed Pentax to design an extraordinarily small camera system.

Kodak introduced 110 film in the early 1970’s. They didn’t intend for it to be for serious photographers, and only made cheap entry-level point-and-shoot cameras for it. Kodak never figured that anyone who had more than a basic understanding of photography would ever be interested in using 110 film. It was great for those who knew very little about photography, those who valued simplicity over quality. Pentax, on the other hand, saw an opportunity to create a miniature interchangeable-lens camera aimed at a more advanced user. Perhaps the compact size of the gear would be enough for photographers to overlook the inferior film format.

The Pentax Auto 110 was only moderately successful. It sold enough copies for Pentax to continue to market the system for seven or eight years. The first camera, the Auto 110, was replaced by the slightly improved Auto 110 Super in 1982. Initially Pentax made three lenses for the camera, all very tiny, and in the early 1980’s they introduced three additional small lenses. As the name implies, the camera was fully automatic, except for focus, which was manual. Around 1985 the system was discontinued, and not long afterwards forgotten.

Two things gave the Pentax Auto 110 camera new life in recent years: the lomography movement and the ability to use old lenses on new cameras via adapters. As 110 film became less and less popular, it was discontinued altogether by major manufacturers. Around 10 years ago Lomography stepped in and began selling it, making 110 film somewhat trendy, which increased the popularity of cameras like the Pentax Auto 110. Because 110 film is similar in size to Micro 4/3 sensors, the Asahi lenses made for the Pentax 110 Auto became in-demand for use with Olympus and Panasonic MFT cameras.

When I saw the little lenses, I wondered if they could be adapted to Fujifilm X cameras. Could I even mount these tiny lenses to my X-T30 and X-T1? A quick search revealed that Fotasy makes an inexpensive Pentax 110 to Fujifilm X adapter. But would it work? Would the lenses cover the frame? After all, APS-C sensors are larger than a 110 film frame. Are the lenses any good? I wasn’t sure the answer to these questions, but I gave it a shot and purchased an adapter and a Pentax Auto 110 camera with three lenses. 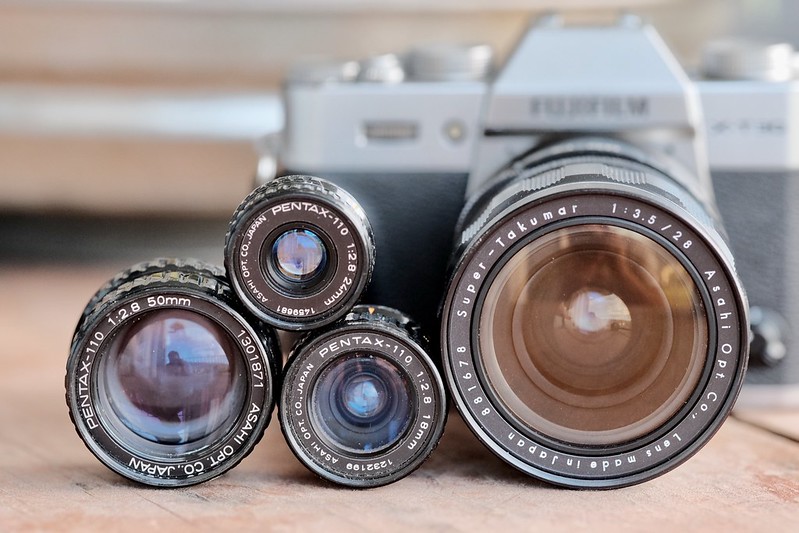 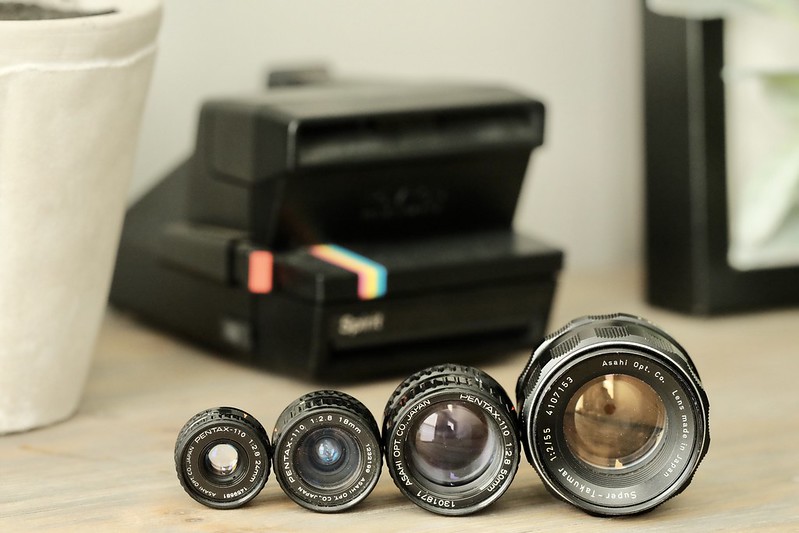 These three lenses, which are 18mm, 24mm and 50mm, all have an aperture fixed at f/2.8. You cannot stop down. It’s f/2.8 and be there! They are manual focus only. They’re pretty darn small, much smaller than any APS-C or full-frame lens that I’ve ever used! If you want something small and lightweight, these are the lenses for you! They’re absurdly and almost comically small when mounted to a Fujifilm X camera. The smallest of the three is the 24mm, which is likely the littlest lens in the world that you can attach to a Fujifilm camera.

I gave these lenses a chance. I attached them to my Fujifilm camera and went out to shoot. I wanted to put them to the test. One thing that stood out to me is that these lenses make the camera feel lighter and smaller, because it is! Even the largest, the 50mm, is smaller than other lenses I’ve used before. You can have one lens on the camera, plus two in a snack-size ziplock bag in your pocket, and you’ve got a three-lens kit. This setup is good for travel because it is out of the way, with the two spare lenses taking up almost no space in your pocket. 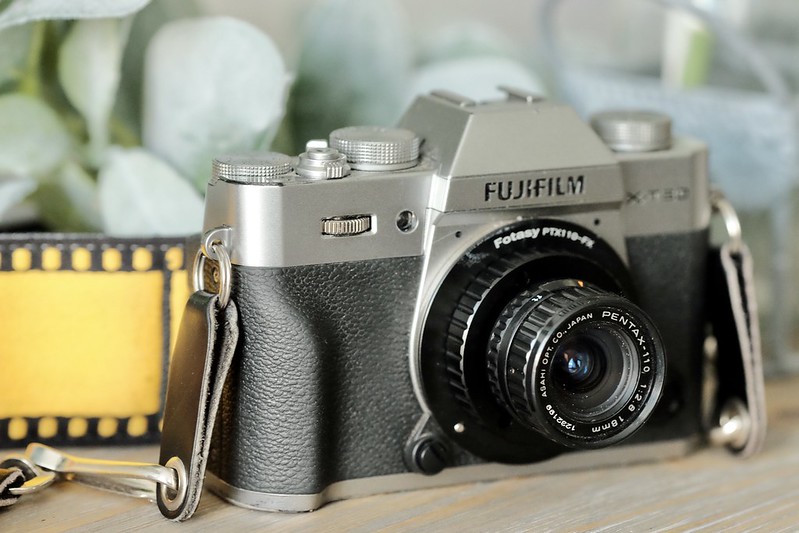 The Asahi Pentax 110 18mm f/2.8 was the lens that I was most excited about. I thought, of them all, this one has the most potential to be useful. Because of the fixed aperture, I knew that depth-of-field would be narrow on all of the lenses, but it would be largest on this lens because of its wide focal-length, which is full-frame equivalent to 27mm on Fujifilm X cameras. The further towards infinity that you focus, the larger the depth-of-field becomes. When focused at the close end, depth-of-field is indeed small, and I was shocked by just how good bokeh (the quality of the out-of-focus portion of the image) is on this lens.

Surprisingly, this 18mm has good coverage on the APS-C sensor. There’s some pronounced vignetting and corner softness, which you can easily crop out or leave for artistic effect. Sharpness is good at the center, but the lens becomes less sharp as you move away from the center. There’s some obvious chromatic aberrations and highlights tend to have an Orton-ish glow. This lens might be good for “dreamy” pictures. Overall, I didn’t like the 18mm nearly as much as I thought I might, and I didn’t use it as often as the other two lenses. 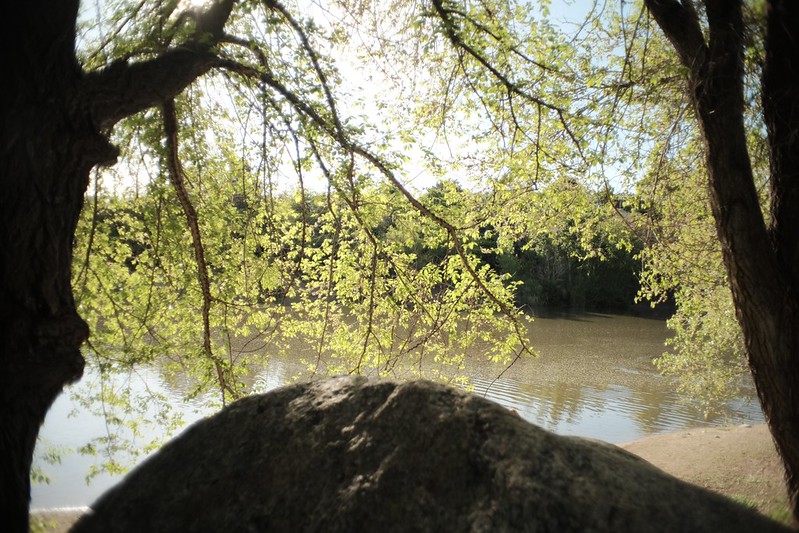 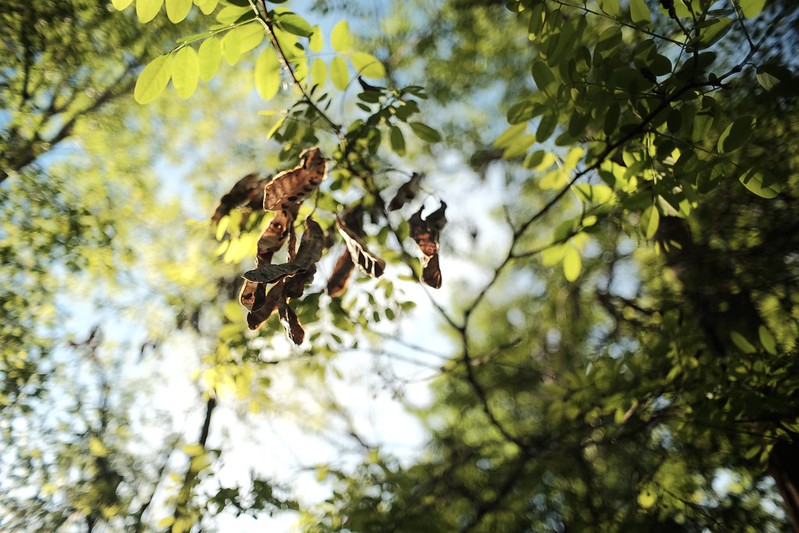 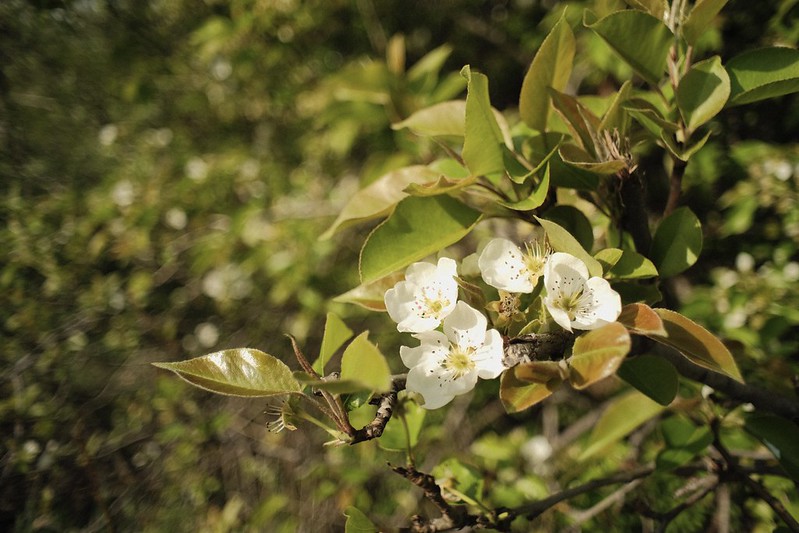 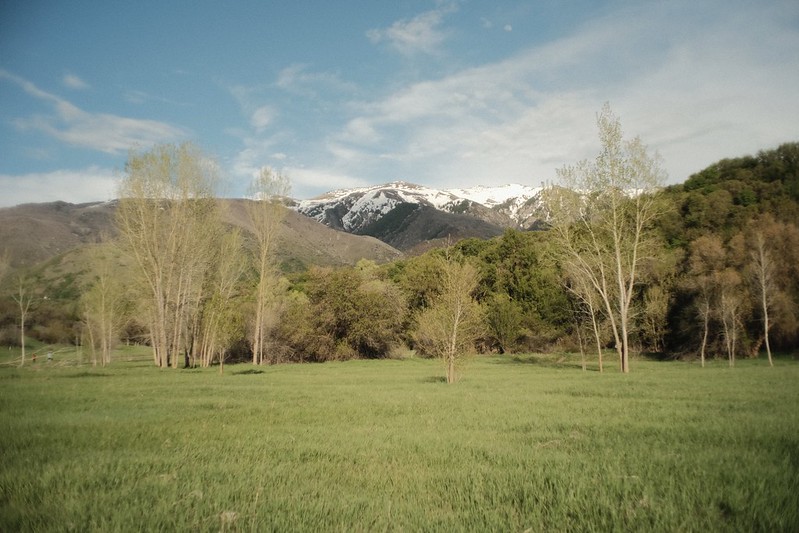 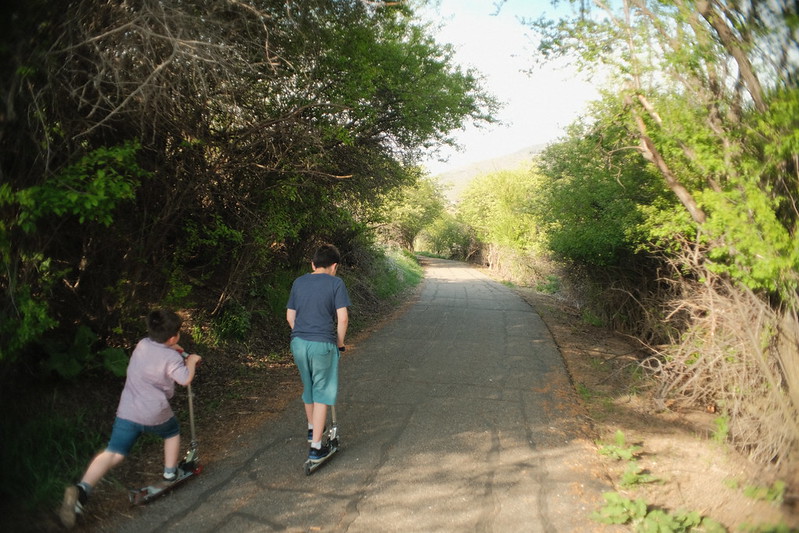 The Asahi Pentax 110 24mm f/2.8 is the smallest of the three lenses, and the smallest interchangeable lens that I’ve ever used. It’s unbelievably tiny! I doubt that you’ll find a smaller lens that can be attached to your Fujifilm camera. Because of the focal length, which is full-frame equivalent to 36mm, this lens has a narrow depth-of-field, especially when focused at the near end. Bokeh is great!

Like the 18mm, this lens covers the frame, but there’s some obvious vignetting and corner softness. Center sharpness is good, but the lens becomes less sharp as you move away from the center of the frame. There are some chromatic aberrations and highlights tend to glow, but neither are as pronounced as the 18mm. Overall I liked the 24mm lens more than the 18mm, but it didn’t impress me enough to want to use it all of the time. 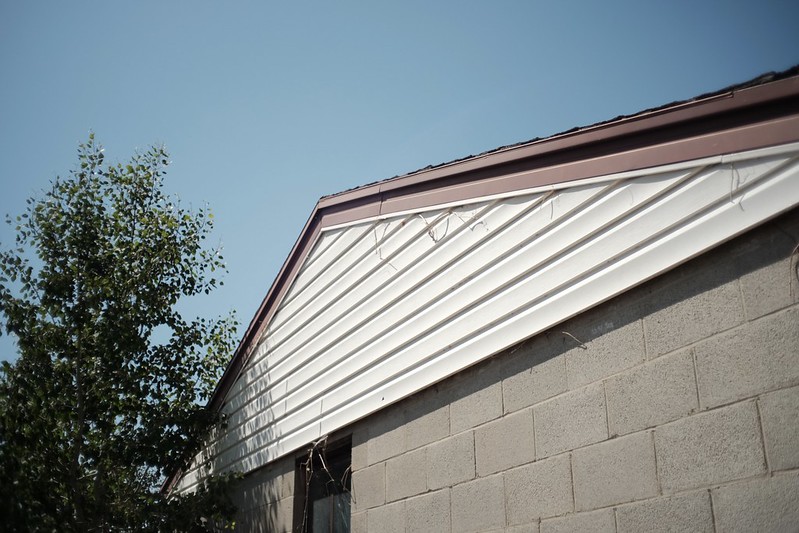 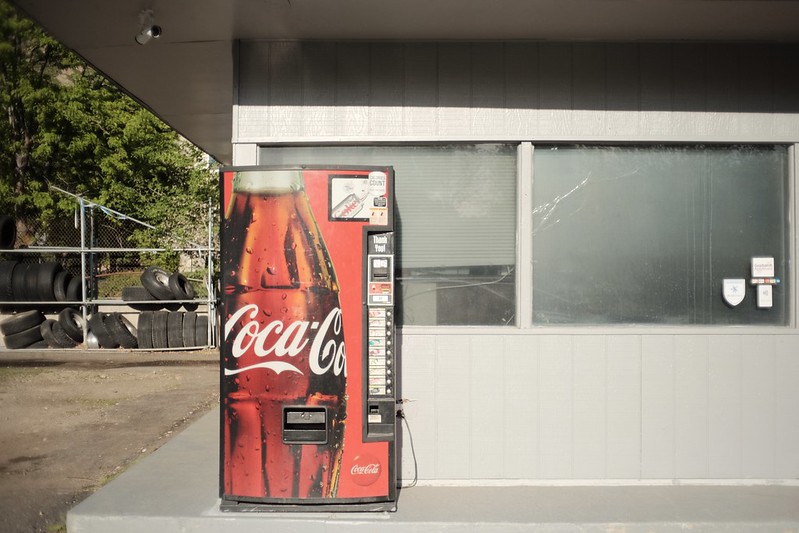 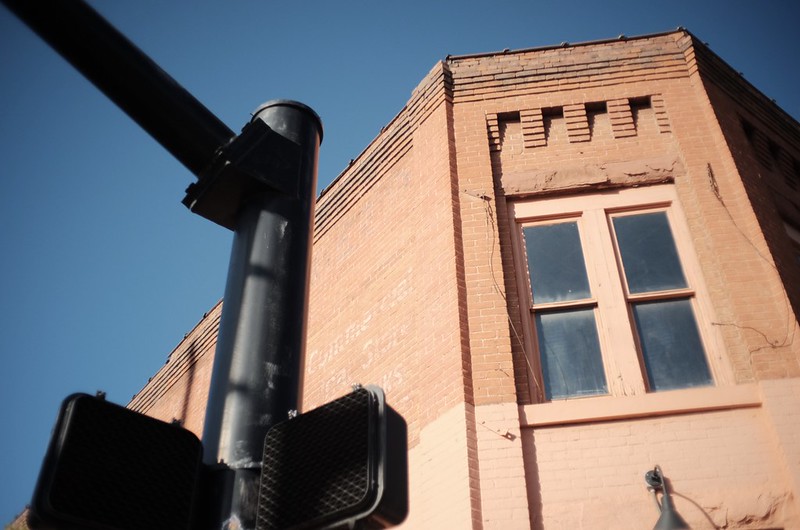 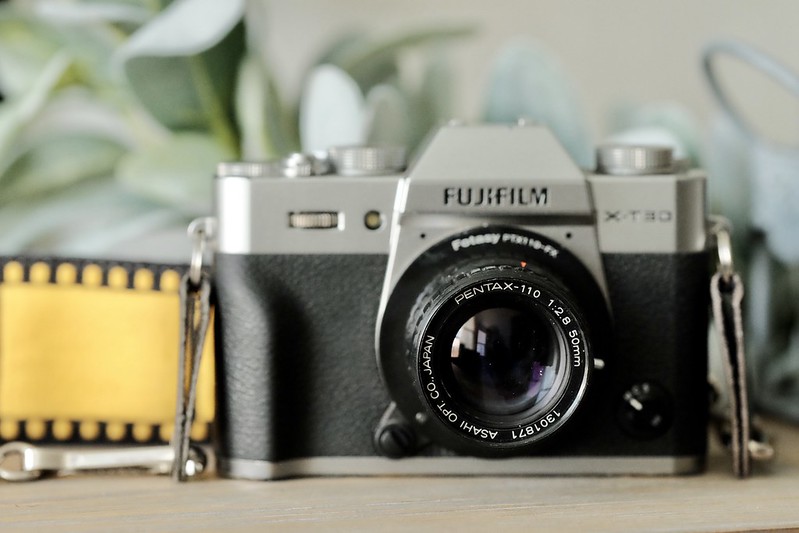 The Asahi Pentax 110 50mm f/2.8 is the lens that I thought I’d like the least. Why? Because I already have several great 50mm (or near 50mm) lenses that I really like. Because of the focal length, which is full-frame equivalent to 75mm on Fujifilm X cameras, this lens has the most narrow depth-of-field of the three, especially when focused towards the near end, where it’s very thin. Once again, bokeh is great. Lens flare, if you like lens flare, can be downright amazing!

While there is some light falloff near the corners, this lens definitely has 100% coverage on APS-C sensors. It’s sharp in the center, and becomes less sharp towards the corners, although not quite as bad as the other two lenses. I did find some chromatic aberrations, but it’s pretty minor, especially when compared to the others. The 50mm lens was the most difficult of the three to use, but the results were the most rewarding. This was my favorite, and the one that I used most often. Of the three, this lens is the one that I can see using again and again. There’s something special about it. 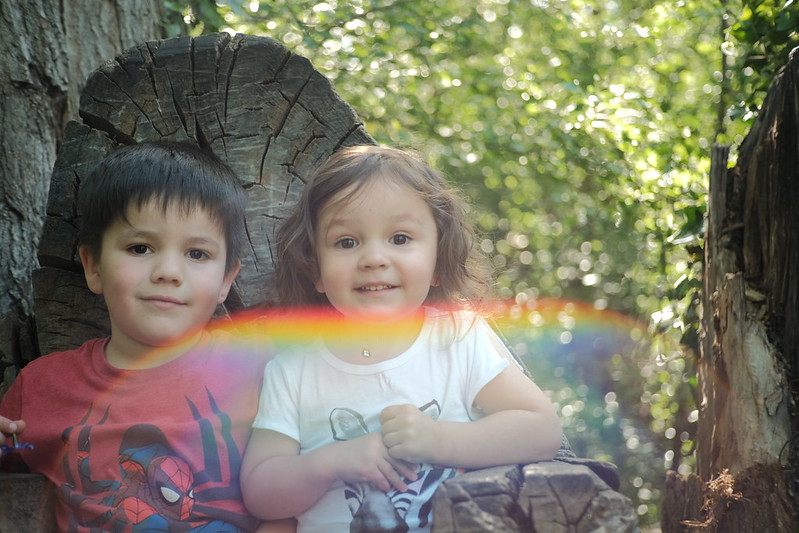 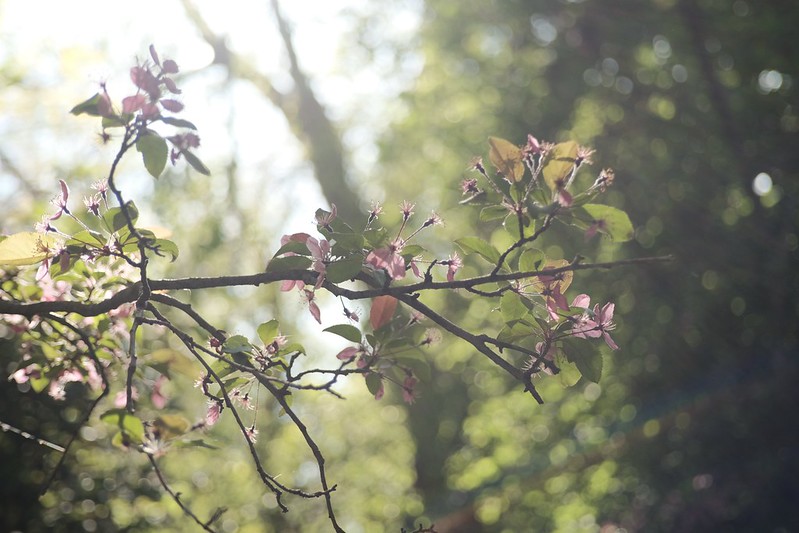 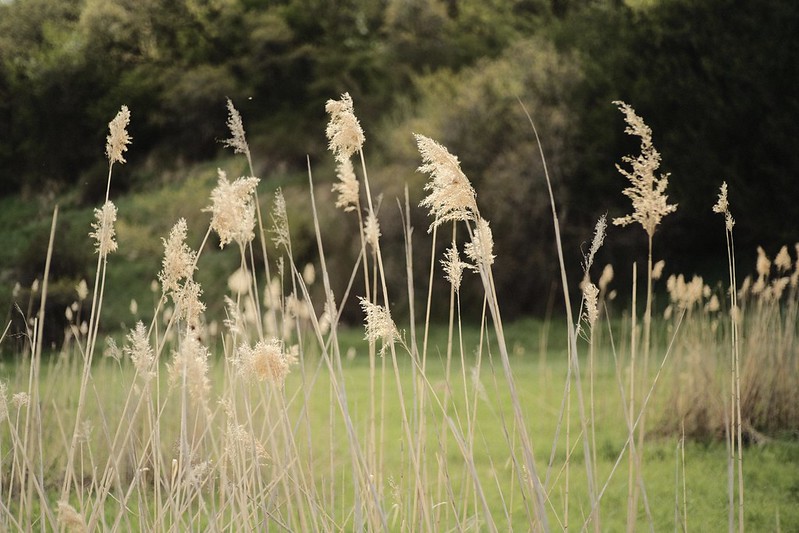 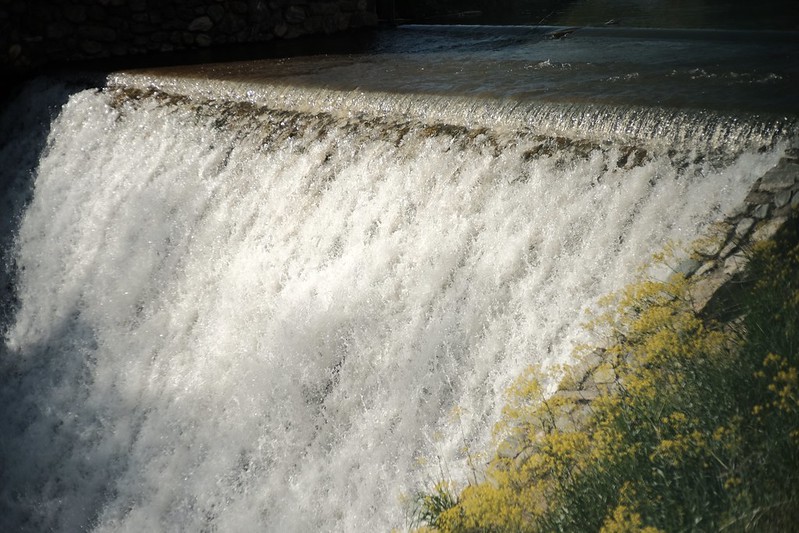 While using these tiny lenses on my Fujifilm cameras was a bit strange, I thoroughly enjoyed the experience, and I’ll definitely do this again sometime. I also plan to use the Pentax Auto 110, as I purchased three 110 film cartridges to use in it, and I’ll share the results when I do. I’m not afraid to do unusual things sometimes, like sandpapering a camera or taping cardboard to the front of a lens, and using little lenses intended for another camera is certainly unusual. If you’re looking to try something different, attaching Asahi Pentax 110 lenses to your Fujifilm camera is just that. For me it was a great experience, and these little lenses provided me with big fun!