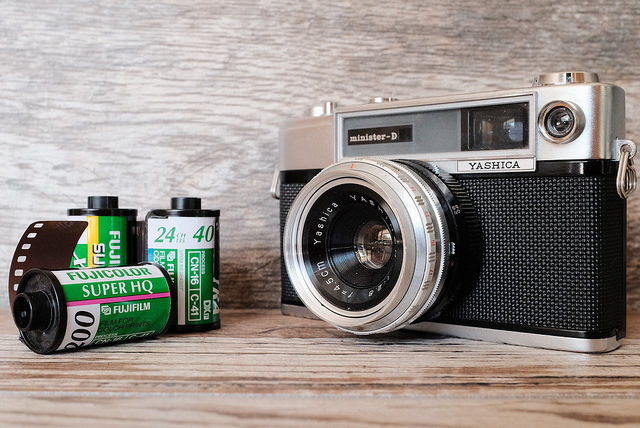 Yashica used to make 35mm and medium-format film cameras. From the 1950’s through the 1980’s Yashica was a popular brand. They are perhaps best known for introducing the first electronically controlled camera, the Electro 35, in 1965.

Yashica has long been out of business, but the brand is being revived with a brand-new digital camera with a twist. The Yashica Y35, which is being crowdfunded, will come out next year. The twist? You have to load “film cartridges” into your digital camera, and the camera will not allow you to take the next picture until you have advanced to the next frame via a lever on top.

To use different “film simulations” you have to buy and insert a fake film cartridge into the camera. You have four choices: ISO 1600 color, ISO 400 B&W, ISO 200 color, and ISO 200 color square. I like the idea, but would like a few more options. Maybe they have plans for more in the future, who knows. 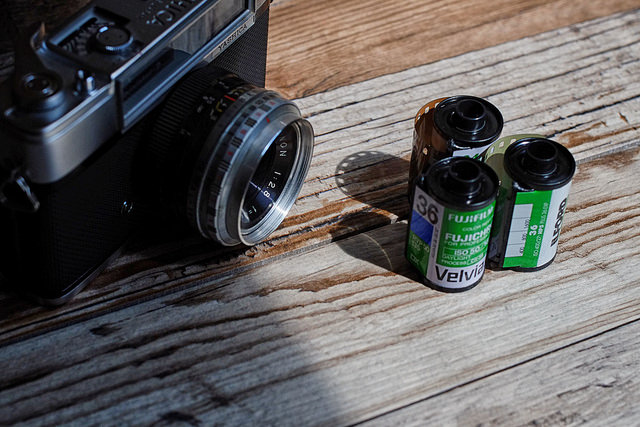 You have to “advance the film” in order to take the next shot, which might not be a bad thing. It helps prevent “spray and pray” and generally anything that slows you down can be good if you use the extra time to better compose the scene. The only other control is shutter speed (you have five options between 1 second and 1/500). You control the ISO with the “film” choice and the aperture is fixed at f/2.8. The camera’s focal-length is 35mm-equivalent. It is manual-focus-only, and there is a built-in viewfinder. There is no LCD on the back (a good thing, in my opinion).

What I don’t like is the sensor. It’s a 14-megapixel 1/3.2” CMOS, which isn’t even as large as some cellphones. You can expect a noisy image with a small dynamic range. That’s really too bad, because it seems like an interesting idea otherwise. Maybe they will make a larger-sensor version in the future (1″ maybe?).

The camera isn’t that expensive. It’s only $150 for the camera and four “films” if you join their crowdfunding effort, which expires in a few hours, otherwise you can expect to pay a little more in April when the camera comes out. I think it is probably more of a toy camera for kids than anything serious, but that doesn’t mean it won’t be fun.

How does all this relate to Fujifilm? I would like to see Fuji offer a camera similar to the X100F without an LCD and without auto-focus, just manual only. Maybe in the $500-600 range. I would also like Fujifilm to develop new film simulations and offer them as downloads. You choose which films you want and don’t want. I think that’s a great idea.