The Paramount Pictures logo is one of the most recognized symbols in Hollywood. The logo’s history dates back more than 100 years, when one of the founders of Paramount, William Hodkinson, drew a mountain on a napkin in 1914. The logo, known as Majestic Mountain, has evolved significantly over the years, but it has always featured a high-reaching pyramidal mountain peak. Have you ever wondered if the logo is based on an actual mountain and, if so, which mountain?

William Hodkinson opened a movie theater in Ogden, Utah, in 1907, but he soon set out to California and changed the entire movie business. He became known as “the man who invented Hollywood.” When he doodled the logo, William had only recently left Utah, and what he drew was a mountain that he saw everyday for many years and was fresh in his mind: Ben Lomond Peak. It wasn’t necessarily an accurate portrayal of the mountain, but a quick sketch based on memory.

Ben Lomond Mountain is a 9,711′ peak in the Wasatch Mountains. Situated just north of Ogden, it looms over the city like a sentinel. I can see it from my home which is about 16 miles away. It is certainly majestic, but it’s also easy to overlook among the many other mountain peaks in the Wasatch range. Even though I see the peak all of the time, only recently have I attempted to photograph it.

As the logo was redrawn and evolved over the years, the likeness to Ben Lomond Mountain has diminished, and other mountain peaks have been used for inspiration. Still, the early Paramount Pictures logo featured a rough drawing of the peak north of Ogden, which is the majestic mountain that symbolized the new company that would quickly change the whole movie industry. The logo has been widely viewed for so long, yet few know of its origins, making Ben Lomond Mountain both famous and an obscure landmark. In fact, many local residents are unaware that it was the inspiration for the original version of one of the most recognized logos in the world. 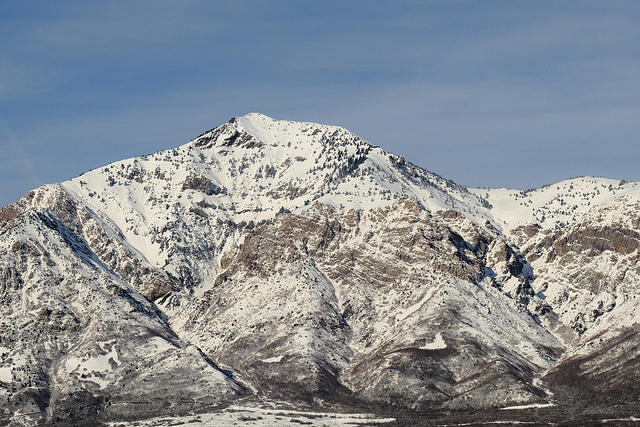