It was a beautiful moment. The sun was preparing to set on what had been an adventure-filled day. The sight was breathtaking. My wife and I were enjoying the grandeur, breathing in the occasion, and appreciating the company. This slice of time was special, set apart from the rest, worthy of a lifetime remembrance.

I quickly set my Fujifilm X100F to be in auto-mode and handed it to my ten-year-old daughter, Joy, and I asked her to take a picture of us. The camera is small and lightweight and easy for a kid to handle. It’s perfect to hand over and get a decent picture from a non-photographer. My daughter captured Love As Deep As The Canyon at the top of this article, and it’s a cherished picture, one of my favorites from the trip.

My daughter has had a knack for making interesting photographs ever since she was a toddler. I’m not sure if it’s just her perspective (being little), her childhood creativity, or just the free spirit of not knowing the rules (or something else or a combination of things). I’m happy to let her use my camera occasionally, and watch her capture images that I couldn’t.

Sometimes strangers will offer to snap a group family picture for us. I’ll often say yes, and I’ll let them snap a photo with my camera. I’ve yet to have someone run away with my gear or break it, although I’m always a little concerned that might happen. The results are rarely anything good, but at least we have a visual record that we were all there together. 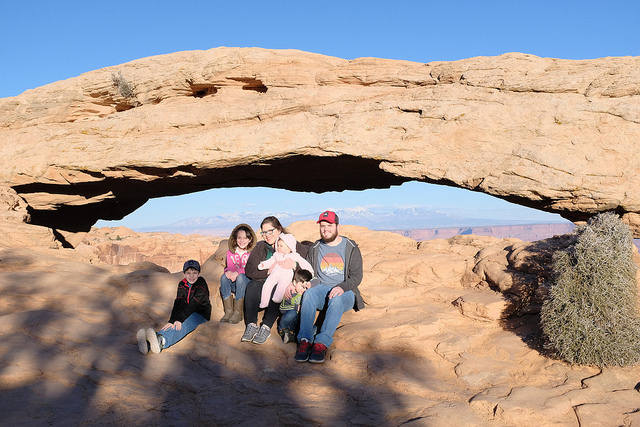 What makes it possible is the X100F’s ease of use. In a matter of seconds I can have the camera set to auto, and then let the person, whether my kids, wife or a stranger, snap a picture. I just show them which button to press to make the exposure. Every once in awhile I get lucky and the picture is good (like the one my daughter captured). Most of the time the picture is very mediocre at best, but I’m not asking a stranger to create art with my camera, only to document a fraction of a second of time and space. And it seems like anyone can do that, because all it entails is holding the camera and pushing a button.

I don’t use the X100F in full auto myself. I like to control many different things, such as aperture, shutter, etc., etc., because I am trying to create art, or at least something other than a thoughtless snapshot. I like the layout of the controls, the retro-styled knobs and such, that allow me to make quick changes without jumping through menus. But another great aspect is the ease of use. When handing the camera to a novice, as long as I set it up well for them (take it out of manual), I can tell them to “push that button” and the camera will capture a correctly exposed, correctly focused image. Even in a tough situation with harsh lighting.

The picture above, Roesch Family At Mesa Arch, is a snapshot by a stranger who volunteered to take our picture. It’s not a great image, especially since we were looking directly into the low sun and have squinting eyes. But it’s a rare photograph with the whole family, because I’m usually not in the pictures (since I’m the one that’s capturing them), or if I am in the picture my wife isn’t (because she captured it). There aren’t a whole lot of pictures that feature all six of us, so this one is precious to us even though it’s not great.

A thoughtless snapshot by a novice will never be great. I could never expect something worthy of hanging on the wall from a stranger. I’m quite happy with what I did get, a so-so picture with all of us in it, and it’s thanks to the easy of use of the X100F. My daughter, on the other hand, did manage to capture something worthy of printing and hanging on the wall, and that, no doubt, is a true treasure.