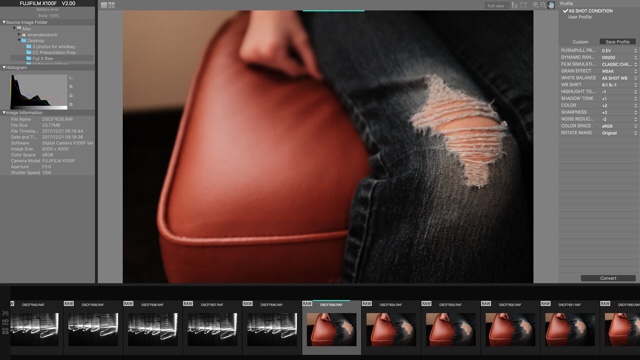 Fujifilm recently launched X RAW Studio, which is a new RAW photo editing software with a twist. What’s unique is that it uses your Fujifilm camera’s built-in RAW editor to do the actual work. The program basically allows you to view and edit pictures on your computer monitor instead of the back of the camera, but you are still using the camera to post-process.

To use the software, you must first go into the camera’s settings menu and, under the wrench, choose Connection Setting, then PC Connection Mode, and then USB RAW Conversion. If you don’t do that it won’t work. If you select the USB RAW Conversion setting and you normally upload your pictures to your computer using a USB cable, that will no longer work, so consider how you transfer your photos from your camera to your computer.

If your Fujifilm camera is set to RAW or RAW+JPEG, you can use X RAW Studio to edit the RAW files and convert them to JPEGs. The software sends the RAW file through the USB cable back to the camera (where it is processed) and then sends a finished JPEG to the computer. When using the GFX-50S, there is an option to save as TIFFs instead of JPEGs, but it’s only available for that one camera. It would be appreciated if a future update allowed the TIFF option no matter the camera.

The post-processing options that X RAW Studio provides are the exact same ones found on your camera’s built-in RAW converter. Using this software is the same as doing the RAW conversions on your camera. The only benefits are that you can see it on a large screen and you can batch edit. I like that there’s a histogram, and so you get a better idea of what exactly each adjustment is doing. But beyond that, there’s nothing particularly exciting about X RAW Studio.

I was hoping it was something that would give me the flexibility of fixing the occasional exposure that I didn’t get quite right in-camera while not slowing down my process too much. What I found is that it slowed me down a whole bunch, but I was able to fix some photographs that needed work because I screwed up when I captured them. So it was helpful in one aspect and not in another.

I think, for the RAW+JPEG shooter, the best way to use the software is to set aside the RAW files for the occasional pictures that need work, and then use it for those few pictures. If you’re sorting through hundreds of exposures, it’ll take much too long using X RAW Studio. It could simply supplement your current process from time-to-time when needed.

If you are a RAW-only photographer, I don’t suspect you’ll find much use for this software because you probably paid money for something that’s much more capable. However, if you like the look of the different film simulations, perhaps you might find some use for it. If you are a JPEG-only shooter, this software does nothing for you.

I hope Fujifilm improves X RAW Studio in the future. Besides adding the ability to transfer photos from the camera to the computer with the software and the option to save-as TIFFs, I have a couple of other suggestions that would make it more useful. I think adding a Digital Teleconverter would be great. When you shoot RAW+JPEG you cannot use the camera’s built-in Digital Teleconverter, so having the option to use it in X RAW Studio would be very helpful. Another suggestion would be the ability to crop, even if it is the same simple crop option found in the camera.

Fujifilm’s X RAW Studio is a unique software for converting RAW files to JPEGs. I imagine that some people will find it useful and many will not. It’s brand new, and I think that some improvements are coming in the future, and if done right, it could be a nice tool. I suggest trying it and seeing what you think for yourself. Just keep your expectations low.