I recently returned from a road trip across several U.S. states, which I photographed with a Fujifilm X100V and X-T30. The trip began in Farmington, Utah, which is where I live, and over a week-and-a-half my family and I pulled a travel trailer across Idaho, Wyoming (just a little), and Montana, and back to Utah. I visited two national parks. I saw incredible lakes and rivers. It was just a great road trip!

Upon returning, I was unsure how to best share the experience with you. I decided to break the trip into a series of articles called Traveling With Fujifilm. I’m not sure exactly how many parts there will be in all, but there will be many! This is Part 1. It won’t necessarily be in chronological order, but I hope in a logical order that makes some sort of sense.

The trip began on July 2nd right after sunrise. The trailer was already packed and ready, and already attached to the truck. We just had to load ourselves into the truck and leave. There are six of us: my wife and I, plus our four children. The truck seats six. It was a tight fit. We bonded (and occasionally not), as we spent significant stretches of time together on the open road.

The first day took us from our home in Utah to Island Park, Idaho. For the most part it’s rural country. We made a few stops for gas and food, but mostly pushed through to the destination. Island Park is amazingly beautiful! I’ll save that for another article, so you can look forward to it. 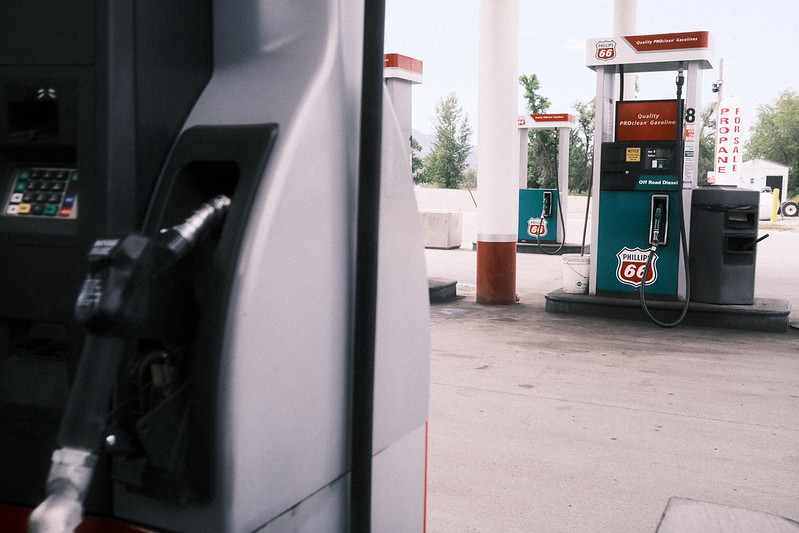 The film simulation recipes that I used for these three pictures are Fujicolor Superia 100 and Fujicolor Superia 1600. I only used the Fujifilm X100V for this section of the trip. This camera is great for this type of photography. No need to carry a camera bag filled with lenses. One camera, one lens. In fact, I used the X100V for about 90% of the pictures on this trip. While this article has only a few photographs, most in this series will have many more.

Come along for the ride! Join me on this adventure by following this series. I hope that you’ll find it enjoyable, inspirational and perhaps even helpful to your photography.